Greatest American Speeches - Analyzing Why They Influence You "Eloquent speech is not from lip to ear, but rather from heart to heart."

Powerful speeches turn everyday people into wizards, casting a spell over an audience that bends their ears to the turn of a phrase. Public speakers tug on the heartstrings of a crowd to sway them toward an opinion.

Whether they’re pushing for action like Hillary Clinton or laying out their plans for a nation like 2016 President-elect Donald Trump, thought-provoking speeches work like magic. Public speakers simply replace incantations with anecdotes to connect with a crowd. Even Kanye West found a way to ignite the masses with his infamous VMA mic-snatch from Taylor Swift.

To make sense of this magic, we ran 100 of the top American speeches delivered by politicians and celebrities through a platform called TextStat, which compiles and aggregates text analysis from no less than 6 highly-regarded textual analysis methods. Here's a list of the methods our data includes:

On this data-intensive basis, we set out to determine exactly what defines the strongest speeches America's ever heard. Read on to see which important words challenged listeners, as well as those an elementary school could study.

Speaking On Your Level Most great American speeches don’t require you to have a Ph.D. to get their message, but there are quite a few that might call on your basic comprehension skills. In fact, 11 of the top 25 greatest American monologs we analyzed had a 9th- to 10th-grade-and-above reading level.

President John F. Kennedy’s inaugural address – delivered on Jan. 20, 1961 – contained his famous line, “And so, my fellow Americans, ask not what your country can do for you; ask what you can do for your country.” His words rated at a 10th- and 11th-grade reading level.

President Kennedy also has two more discourses in the top 25: the Greater Houston Ministerial Association speech and “Ich bin ein Berliner.” They contained 8th- and 9th-grade and 11th- and 12th-grade reading levels, respectively. That brings his talking tally to three – more than anyone on the list.

"11 of the top 25 greatest American monologs we analyzed had a 9th- to 10th-grade-and-above overall reading level."

Martin Luther King Jr. delivered two of the top 25 discourses, but unlike Kennedy, he used language more accessible to all of us. Whether you were highly educated or considered yourself the “common man,” his “I Have a Dream” speech ranked the highest – possibly for its gripping content and welcoming 8th- and 9th-grade reading level.

King carried his words over the steps of the Lincoln Memorial in Washington, D.C., on Aug. 28, 1963, when he became the greatest American podium-hugger of our time. His other top deliverance on the list, “I’ve Been to the Mountaintop,” came in at an effortless 5th- and 6th-grade reading level.

Greatness At Any Level 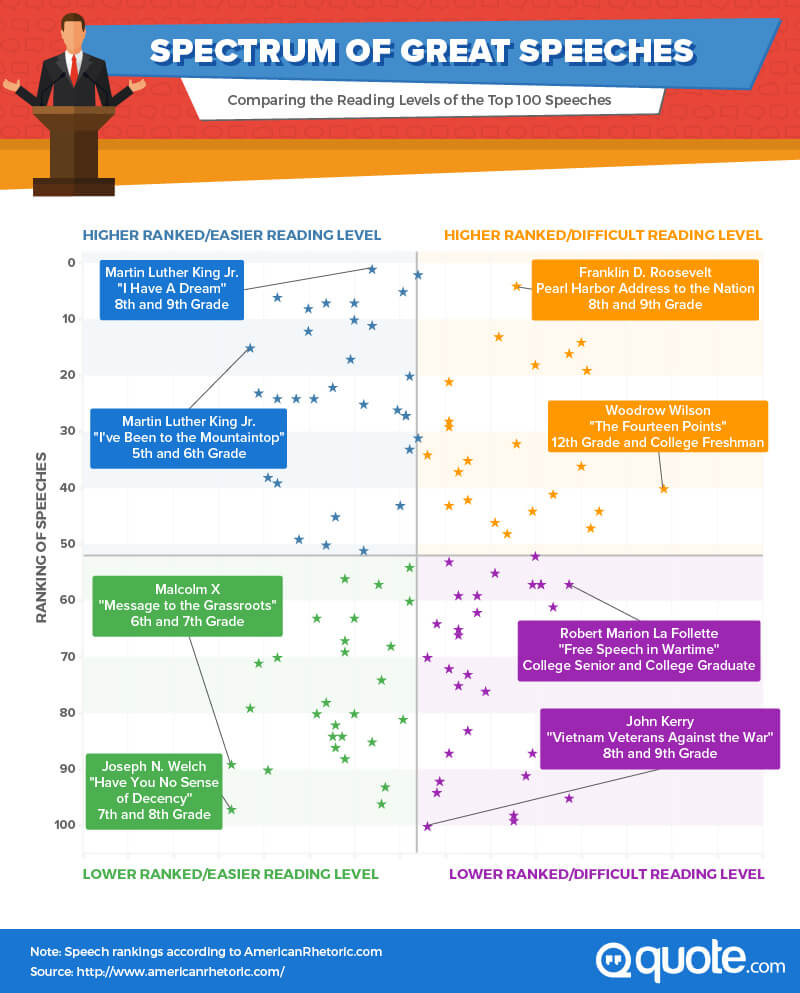 Speeches, especially the great ones, can latch onto a moment. Whether their purpose is to rally us around a cause or to outline a necessary course of action, to instill in us confidence or strike in us fear, the top 100 people and stories featured are neither too difficult nor too easy to comprehend.

Most of these speeches score between 45 and 85 (a lower score means the words are harder to understand than those with a higher score).

Malcolm X’s “Message to the Grassroots” was No. 88 on the list and had a readability score of nearly 85. Perhaps this is due to the casual tone he takes at the beginning of the speech: “We want to have just an off-the-cuff chat between you and me, us. We want to talk right down to earth in a language that everybody here can easily understand.”

President Thomas Woodrow Wilson’s “The Fourteen Points” was the most challenging. It earned a readability score just above 35 and gave a prescription for peace near the end of World War I to boot! Some presidents tailor their talks to their audience, but on average, they tend to make use of denser vocabulary words. We analyzed all inaugural texts and found they averaged around a 47 on the Flesch-Kincaid Reading Ease scale, or “difficult.” When you look at the top 10 most complicated monologs based on reading level, the most recent is the inauguration of President Grover Cleveland (1885).

In fact, the three most mentally demanding addresses are over 200 years old – James Madison’s in 1809, George Washington’s in 1789, and John Adams’s in 1797. They each had a score of less than 20 on the Flesch-Kincaid Reading Ease scale. (For example, Adams spoke to the “zeal and ardor of the people” in his address, which was a fancy way of talking to us about passion.)

Broadcast technology – radio in 1925, television in 1949, color television in 1961, and the internet in 1997 – likely altered the writing process for our future presidents. These mediums increased the number of us tuning in to hear our new leaders speak. Nine out of the top 10 heads of state – President Woodrow Wilson being the exception – delivered orations with the easiest reading levels from 1953 forward.

Of course, those events also appeared on TV.

Trump Stumps Up, Hillary Talks Down Before the U.S. elected Donald Trump as president, we examined the language from the 2016 candidates’ most important addresses to date – each party’s nomination acceptance. It was Trump, not Hillary Clinton, who delivered a higher reading level. His words read like an 8th- and 9th-grade essay. Clinton’s read at a 6th- and 7th-grade level.

"It was Trump, not Hillary Clinton, who delivered a higher reading level. His words read like an 8th- and 9th-grade essay. Clinton’s read at a 6th- and 7th-grade level."

Even though these two candidates were the faces of the 2016 presidential election, it's worth noting that each of them employed speechwriters and policy advisors to help compose their words. For Trump, it was Stephen Miller, and for Clinton, it was the combination of Dan Schwerin and Jake Sullivan. In case this makes you wonder – yes, Abraham Lincoln wrote “The Gettysburg Address” by himself. We might expect grand speeches from leaders of the free world or civil rights activists, but what about celebrities? How have they commanded crowds and language in some of their most famous public appearances?

Of the 16 most popular celebrity speeches – delivered at award shows, commencements, and even in front of the United Nations – we found many had a reading level of 6th- and 7th-grade. Words from Jon Stewart’s 2004 William & Mary commencement lecture and Stephen Colbert’s 2015 commencement at Wake Forest University met this level as well.

"Rap-mogul-turned-fashion-designer Kanye West provided a rousing speech at the 2016 VMAs at a 4th- and 5th-grade reading level."

At the high end was J.K. Rowling and her Harvard commencement address, which had a 10th- and 11th-grade reading level. She might be known for writing books geared toward children and young adults, but she offered up a denser discourse than some of her peers. Rap-mogul-turned-fashion-designer Kanye West provided a rousing speech at the 2016 VMAs at a 4th- and 5th-grade reading level. Maybe now he’ll leave the writing to Rowling and give us an actual follow-up album to “808s & Heartbreak.” Using the methodology from Nancy Duarte's analysis of Martin Luther King Jr.’s “I Have a Dream,” we’ve broken down Obama’s and Trump’s statements by the present (“What is” language) and the future (“What can be” language).

"President-elect Trump and President Obama may not agree on many issues, but both used the rhetorical device of repetition when speaking to us."

President-elect Barack Obama delivered a victory speech from Chicago’s Grant Park on the eve of his 2008 victory over Sen. John McCain. He allowed his words to live in the land of “What is” – although he campaigned on a message of hope – throughout the beginning and middle segments.

President-elect Trump and President Obama may not agree on many issues, but both used the rhetorical device of repetition when speaking to us.

Trump focused on the need to get to work or to do a job and the difficulties of running a presidential campaign. However, his campaign catchphrase – “Make America Great Again” – was oddly missing from his acceptance speech.

To the Victor Go the Spoils

Above, we can see how the repetition of specific words and phrases can contribute to the simplicity of a message. President Obama’s 2008 victory speech – while it started with an understated, “Hello, Chicago” – helped the then-senator share a vision of hope with the American people. He used repetitive terms in over 20 percent of his speaking engagements.

This is where Obama and President-elect Donald share some common ground. However, Trump didn’t use references to political documents or familiar songs, scriptures, or literature. But these were devices Obama called upon in his memorable acceptance speech.

"Trump didn’t use references to political documents or familiar songs, scriptures, or literature. But these were devices Obama called upon in his memorable acceptance speech."

Obama issued many thanks but pivoted the victory and its ownership to the people who supported him with their donations of money and time. He bolstered his theme with inclusive statements: “Yes, we can,” or similar variations appeared seven times. It’s a discourse that’s meant to engage and inspire action from the American people.

Trump, in a similar fashion, focused on restoring a divided America.

Over time, the way we use language has certainly changed. However, it doesn’t mean complexity is the only way to snag an audience.

And sometimes the medium is the message, as we’ve seen with the change of presidential inauguration speeches. They’ve been somewhat reduced by the static of broadcast media.

Some of the very best spiels keep it simple – Martin Luther King Jr.’s “I’ve Been to the Mountaintop” is just as powerful as Franklin D. Roosevelt’s address to the nation regarding Pearl Harbor.

We analyzed American Rhetoric’s website for the top 100 speeches in history and, specifically, the 21st century. We collected all related transcripts. We also examined a list of every first-term presidential inaugural address and ran a transcript of each through the TextBlob python script called TextStat; this tool analyzed the text based on the following list of measures:

Per the indexes above, TextStat returns the Readability Consensus, which identifies the best grade level under which the given text belongs.

Help your readers understand by sharing our content for noncommercial purposes only. All we ask is that our speakers (or authors of this page) are given proper credit.